Here's a chance to win some art from the District Comics: An Unconventional History of Washington, D.C. anthology! If you buy a copy of the book from any of the Big Planet Comics stores in the D.C.-area from Nov. 1-30, you are eligible for a drawing to win art from the "Ego Shine" story in the book! Just give the store your email upon purchase or you can email me a proof of purchase. Winner will be picked on Dec. 1! 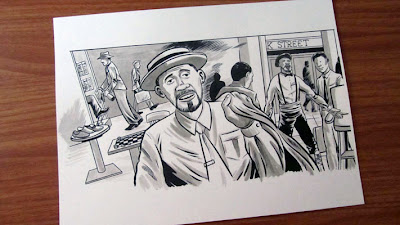 How the cover evolved

Covers for anthologies can be especially tough to design. Sometimes one image can do the trick (get it, "trick," as in Trickster?) but other times it requires something broader and complex. District Comics fell into the latter category. I wanted to include some but not all of the characters from the book on the cover; I didn't want it to be overburdening. I thought a few characters should represent the varied stories in the book and hopefully catch the buyer's eye. Initially, I thumbnailed two possible covers: one with characters from the book coming from behind the flag of D.C. (kind of pulling it open like a curtail horizontally), and the other of character opening the dome of the Capitol and jumping out (see below). 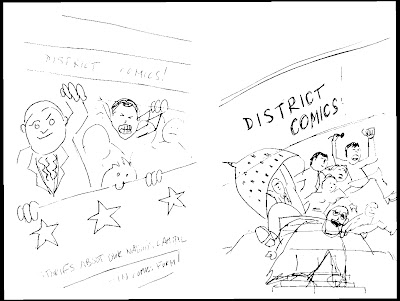 We were on a tight deadline, and I didn't think I could dedicate the time to do a good job on the cover. I approached a couple of contributing artists to possibly do the cover. I floated my sketches to Brooke Allen who did was Brooke does and made it magical. She included ALL the characters forming the shape of the Capitol! 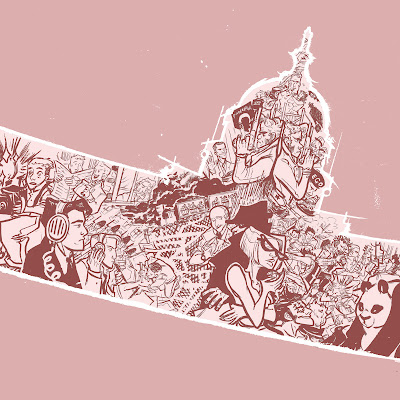 Then came the colors and type. We considered using mostly red and white to represent the colors of the District, but fell a dominate blue color would be better. It was more eye-catching and its red, white and blue look gave the book a more recognizable historical look. 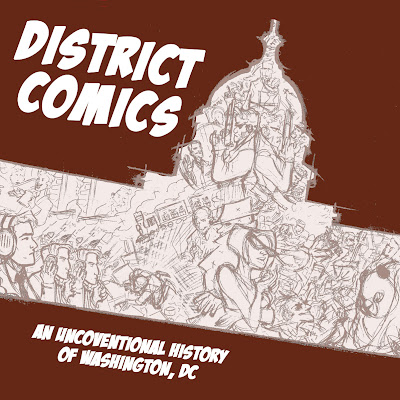 I'll have a limited number of 'District Comics' zipper pulls available at Baltimore Comic Con this weekend (my table is A194 in the artist alley area) and at the Small Press Expo Sept. 15-16 in Bethesda, Md. (table W2). They are the perfect accessory for your fall and winter wardrobe! :) 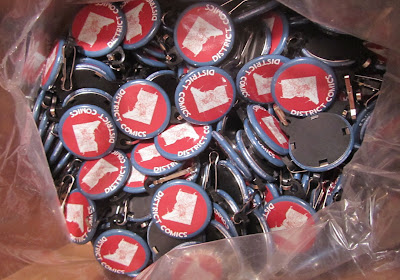 Editor's note: Contributing writer Rebecca Goldfield gives us her story behind "Taps," as well as an actual letter to Keith Clark, as well as some photo references used by artist Paul Zdepski (notice JFK is in one of them). 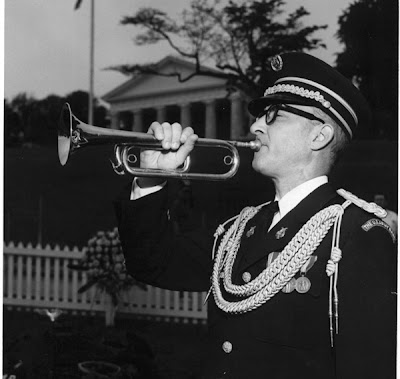 My husband was in The US Army Band, so I’ve heard lots of stories over the years about that experience. Most of them are pretty amusing, like that of the colonel who displayed his musical naiveté by complaining that while the band sounded fine, he wished the trombones would synchronize their slides so that they all went in and out in unison (much to the merriment of the musicians, who well understood that were multiple parts being played). 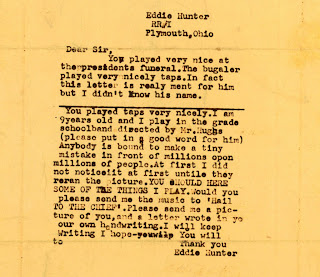 The story he related of Keith Clark (my husband was privileged to perform during the funeral of President Kennedy), however, was the most poignant of the tales he told me. There were things I wanted to include which didn’t quite fit: some of the actual letters Keith received from the public--in a true outpouring of gratitude and empathy. One nine year old boy in a grade school band sent a letter of encouragement to Clark. “Anybody is bound to make a tiny mistake in front of millions opon millions of people” he wrote and then confided, “you should here some of the things I play.” Clark’s widow was generous enough to supply me with those letters, along with many photos, family records and her own memories.

I also wanted to include the fact that when Clark died in 2002, he, like JFK, was buried in Arlington cemetery, to the strains of “Taps”. That particular performance was flawless, but of course the bugler suffered nothing of the ferocious pressure and poor conditions Clark had endured.  “A lot of people can sing in the shower”, Clark once said. His extraordinary grace under pressure is at the heart of this story.
In doing the research (and now this is the writer in me, speaking) I was struck by the simple beauty of the verse. I’d heard the words hundreds of times and given them no thought whatsoever. But now, as I read the words, really read them, I found an unexpected sense of comfort in what seemed as much a prayer as a poem. Here are the first 3 verses:

Day is done, gone the sun,
From the lake, from the hills, from the sky;
All is well, safely rest, God is nigh.
Fading light, dims the sight,
And a star gems the sky, gleaming bright.
From afar, drawing nigh, falls the night.
Thanks and praise, for our days,
'Neath the sun, 'neath the stars, neath the sky;
As we go, this we know, God is nigh. 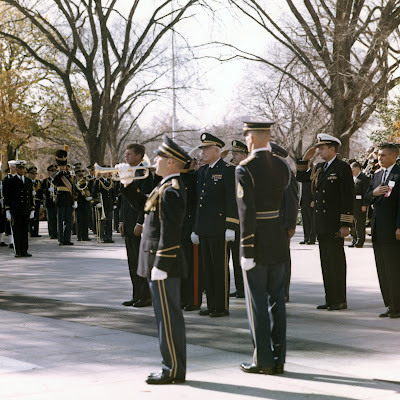 District Comics got a lot of digital ink these last two days! First, a little write up from the Washington City Paper:


Followed by a piece from Scripps Howard:


And ending the day with a Q&A in the Huffington Post:
Posted by Matt D. at 7:16 PM No comments:

Just a reminder that we'll have our first signing for the book on Sunday, Aug. 19, from 3-5 pm at One More Page Books in Arlington, Va. There will be more than 20 contributors on hand to sign (this will certainly be our biggest signing), including:

And, as few cherries on top, the Small Press Expo has generously donated FREE day passes to SPX to the first 25 people who buy a copy of the book at the signing! But wait, there's more: I did a few 5x8 sea-related illustrations (see below) that will be raffled off at the signing! (AND I'll have copies of Xoc: The Journey of a Great White on hand, and, perhaps, a few copies of Trickster? :)

What is District Comics, you ask? “District Comics is a graphic anthology featuring lesser-known stories about Washington, D.C., from its earliest days as a rustic settlement along the swampy banks of the Potomac to the modern-day metropolis. Spanning 1794-2009, District Comics stops along the way for a duel, a drink in the Senate’s speakeasy, a look into the punk scene, and much more.” 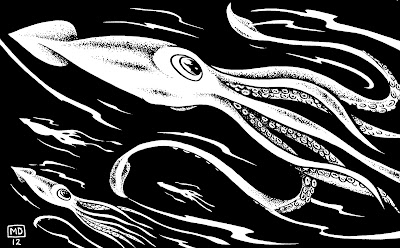 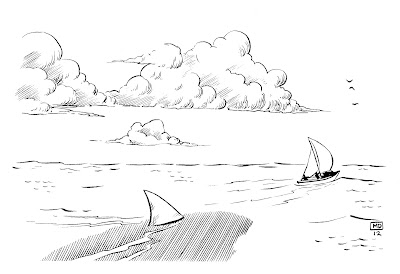 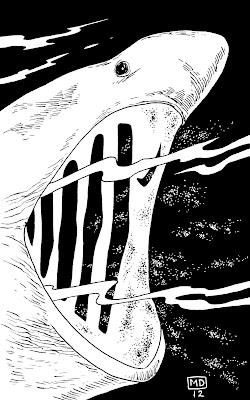 
There was a photograph of two kids in a makeshift boxing ring, and when we tracked those two guys down, they still were around, and we were able to interview them, and again, we got a picture of the family side of the Bonus Army. 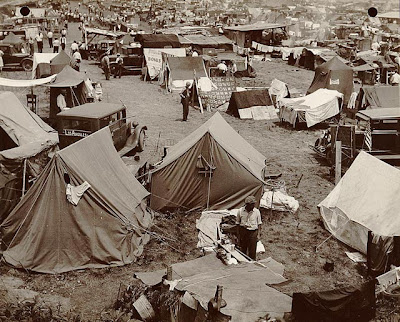